The Law Of Violation Of Promise To Appear Charges For Tickets In Municipal Courts In Texas
5.0 rating based on 12,345 ratings
Overall rating: 5 out of 5 based on 1 reviews.
Anonymous

Violation Of Promise To Appear – “VPTA”

What The Charge Is and How To Handle It

There are more and more courts that are filing additional charges against those that do not appear in court before their appearance date passes on the citation that was issued.  This charge can be more expensive than the original ticket and is used in many instances to generate more revenue for the city that issues the offense.  For that reason, this article is to help those that have been charged with VPTA and what to do about it.

When you get a ticket you are required to sign the ticket as well.  This is not to say you are guilty of the offense.  Sometimes we have clients who say they refused to sign the ticket because they were not guilty.  The signature only marks your willingness to go to court to prove your innocent.  So, best practice is to sign the ticket for the officer and appear in court prior to the appearance date listed on the ticket to resolve it one way or the other.

General rule of thumb is to contact the court by the first week after the ticket was issued.  This gives you an extra 3 days before the 10 day deadline passes.

They key word in this portion of the statute is “willfully.”  This term “wilfully” is not actually defined in the Penal Code Chapter 6 which outlines the mental states.  This makes it difficult to define as a lawyer.    Some courts have described wilfull as intentional.  If they truly are considered synonyms in this instance, then the definition used would be as follows:

It can be argued pretty easily that nobody consciously desires to engage in conduct to cause the result of missing a court date.  It is up to you to speak with your lawyer about the reason for missing court and whether or not it was intentional or due to some other circumstance.  If it was due to some other circumstance, then use that as leverage to argue for dismissal of the case. 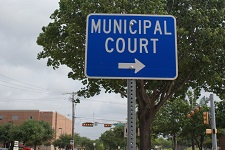 The Law Of Violation Of Promise To Appear Charges For Tickets In Municipal Courts In Texas
Tuesday, February 5, 2019
★★★★★
“ I just got one of these tickets for being 1 day late on contacting the court because my wife was in the hospital. Now I know how to defend it. Thank you for writing this!”
- Steven Sellers